Shakespeare in Our Time

Shakespeare in Our Time

The 1st Hong Kong International Shakespeare Festival (HKISF) originally scheduled for 2020 had to be postponed to 2022 due to pandemic. Thus, Tang Shu-wing Theatre Studio brings a special presentation to you all - Shakespeare in Out Time, as the prelude of HKISF. It consists of two brand new Shakespeare’s productions: “King Lear” directed by Tang Shu-wing, a nonverbal theatre of gesture with all female cast and Ng Wai-shek’s one-man show, “The Rape of Lucrece” (adapted for the stage based on the Bard’s poem). 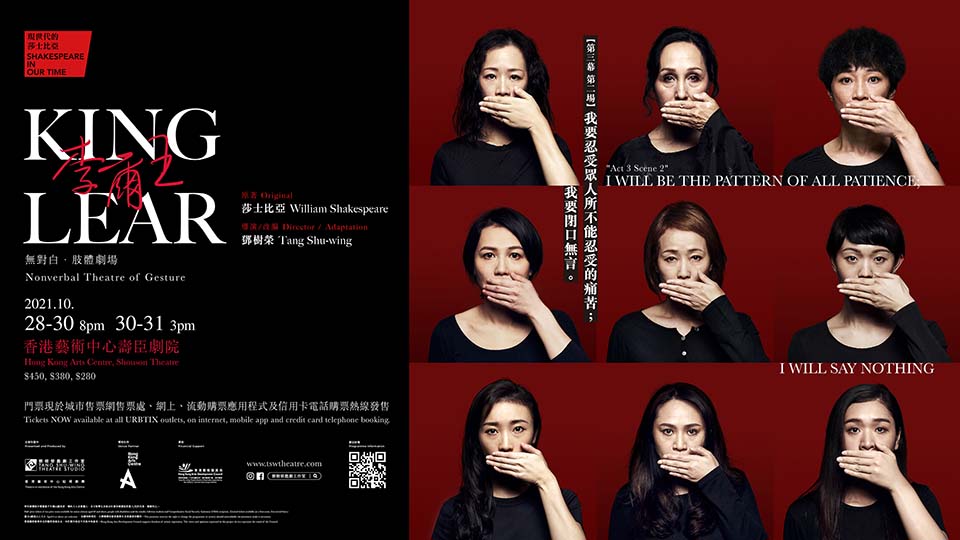 Shakespeare in Our Time: “King Lear“

The old irritable King Lear wants to divide his kingdom among his three daughters but ends up banishing Cordelia, the youngest one, who really loves him. Unable to meet his commands, Lear’s two other daughters reject him at their homes, so Lear goes mad and wanders through a storm in a heath. Trying to rescue her father, Cordelia returns with an army, but they lose the battle, leading to the death of Lear and all his daughters.

A story starts on speech, inducing an exploration on theatrical arts.

Director Tang Shu-wing accidentally reads Tolstoy’s article – “A Critical Essay on Shakespeare”, a severe criticism  on Shakespeare and “King Lear”. He feels excited  because he can think and feel from another angle, and he is convinced that  the greatest human pleasure is to keep learning under any circumstance.

If everything can start afresh, would the world be different? Although Tang cannot predict that, he knows: directing Shakespeare’s plays is always an unknown journey.

One day, he saw an old woman ready to cross the road with two bright little girls. He decided to have a whole female cast and to translate this play into a non-verbal theatre of gesture.

Each purchase of 6 or more standard tickets (20% off)

Hong Kong Arts Development Council supports freedom of artistic expression. The views and opinions expressed in this project do not represent the stand of the Council. 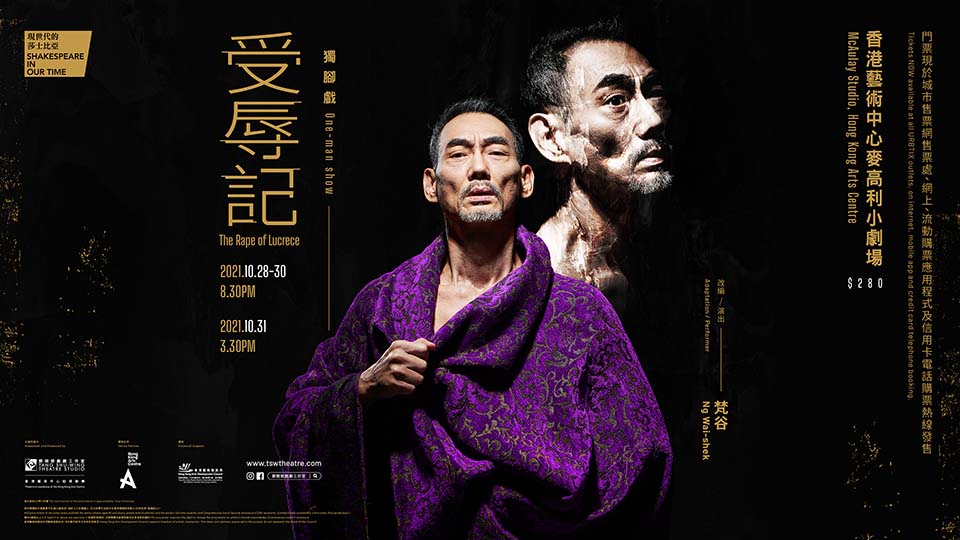 Shakespeare in Our Time: “The Rape of Lucrece”

Collatine, a Roman General, describes his wife, Lucrece, in glowing terms—she is beautiful and chaste, that Prince Tarquin's passions were aroused. Tarquin goes to Lucrece's chamber at night; rapes her and sneaks away. Lucrece named her rapist in front of her husband and father then immediately drew a knife from her bosom and stabbed herself.

The poem is not telling a story but the language of the rapist as well as the feeling of the victim. In collaboration with young musician, lighting and sound designers, Ng adapted the text into a one-man show, exploring what desire and reason is with the audience.

Adapted for the stage by: Ng Wai Shek

The performance is conducted in Cantonese with English Surtitles

Hong Kong Arts Development Council supports freedom of artistic expression. The views and opinions expressed in this project do not represent the stand of the Council.