Japanese director Obayashi Nobuhiko, who died in April last year, is probably one of the most difficult audiovisual auteurs to categorise. From experimental films to TV commercials and mainstream features, he has left behind a large number of works with diverse themes in different fields. He is well known for his imaginative visual imageries, while the locations in which his films take place often become “pilgrimage sites” for film buffs.

Presented by Consulate-General of Japan in Hong Kong and The Japan Foundation, co-presented by the Hong Kong Arts Centre and supported by Japan Autumn Festival in Hong Kong - Rediscovering Nippon, moving image programme The Treasure Box of Love and Death: Obayashi Nobuhiko Film Showcase commemorates this magical film artist, screening nine selected features by Obayashi, including four rarely seen works from the 1980s, from which audiences can observe various motifs found in Obayashi’s films: home, playfulness, pacifism and the tragedy of love.

*With after-screening talk. Conducted in Cantonese.

**Labyrinth of Cinema is classified as Category III, refunds will be made to ticket holders under 18 years old with the unused bought ticket from the day of announcement till 29 November 2021 (Monday) at the box office of the Hong Kong Arts Centre.

“Peace to the world!”
Japan | 2019 | 179’ | In Japanese with English subtitles | DCP | Colour
21/11 (Sun) 2pm (Labyrinth of Cinema is classified as Category III, refunds will be made to ticket holders under 18 years old with the unused bought ticket from the day of announcement till 29 November 2021 (Monday) at the box office of the Hong Kong Arts Centre.)
On its last night of operation before closing down for good, a seaside cinema features a programme of Japanese war movies. A young female cinephile and her three friends are suddenly transported into the silver screen where they encounter Miyamoto Musashi, Ryoma Sakamoto and the Shinsengumi and experience social turbulence and war within a celluloid universe. As Obayashi’s swan song, Labyrinth of Cinema is a summation of his main creative themes and styles, containing his reflections about cinema, war and his memories of growing up. Using the director’s hometown of Onomichi as the starting point, the film explores the labyrinth of history in a meanderingly humorous way. Obayashi persists with his signature experimental style until the very end of his life, offering up a rich and kaleidoscopic cinematic treasure box. 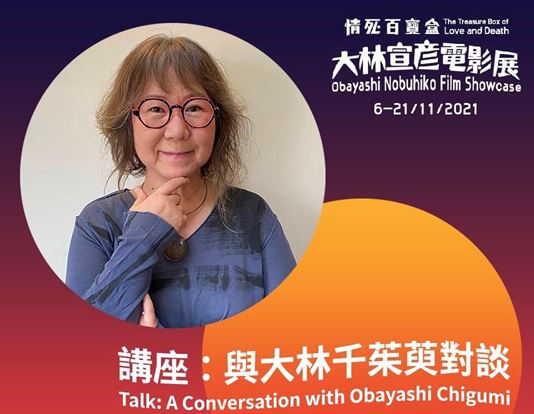 Obayashi Nobuhiko’s daughter, Obayashi Chigumi, will attend a virtual talk to chat about Director Obayashi’s film journey and its stories with the audience.

Ticket Price: $85/ $68*
*20% off discount for full-time students, senior citizens aged 60 or above, people with disabilities and the minder and Comprehensive Social Security Assistance (CSSA) recipients. Tickets for CSSA recipients available on a first-come-first-served basis.
*20% off for HKAC Individual members & HKAC BEE. Discount is only available at the URBTIX Sales Counters, members must present a valid membership card upon purchase.
*20% off for each purchase of 4 or more standard tickets.

Postcards of “The Treasure Box of Love and Death: Obayashi Nobuhiko Film Showcase” 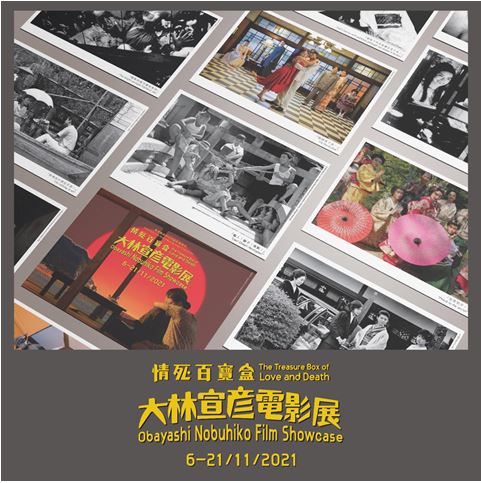 Get a free set of postcards for every purchase of all the eight screenings of “The Treasure Box of Love and Death: Obayashi Nobuhiko Film Showcase” (i.e. eight tickets in total), or a purchase of a ticket of "Talk: A Conversation with Obayashi Chigumi"! Save your ticket stubs and show our staff at the reception at the Cinema for these postcards.
The postcards are available on a first-come, first-served basis and while stocks last.

While it is the HKAC’s policy to secure the best possible screening versions of our presented films, the HKAC appreciates our patrons’ understanding of the occasional less than perfect screening versions. Thank you for your kind consideration.

The following measures will be implemented for screenings, to combat the prevailing threat of Novel Coronavirus:
Facebook: