Opening Ceremony and Screening of The Story of Woo Viet

For a discussion on the function, history and outlook of local and international film festivals, there will be a talk titled Feasting on Futures – the Cannes Directors’ Fortnight and the Celebration of New Cinemas. In May 1969, the first edition of the Quinzaine des Realisateurs – or the Directors’ Fortnight in English – made its bow at Cannes, its mission being to provide a platform for “new voices, new cinemas” to receive the attention they deserve. Since then independent festivals have emerged across the world with the same idea in mind – something even established A-list events have also tried to grapple with. For New Waves, New Shores, Pierre-Henri Deleau, co-founder, former festival directors and artistic director of the Directors’ Fortnight; and Wen Tien-hsiang, Chief Executive Officer of the Taipei Golden Horse Executive Committee will join three young Hong Kong film programmers Nose Chan, Didi Wu and Kiki Ho for an inter-generational and cross-cultural conversation, with the aim of finding common ground and brighter futures for both filmmakers and cinephiles here and elsewhere.

Yov Moor, French film colourist and DI Producer, will visit Hong Kong to be a guest speaker for Masterclass on Colour Grading with a screening of Mustang. The film, graded by Moor, is an apt example of colour grading an arthouse film which is able to remain faithful to its creative intensions, and can communicate effectively to achieve popular success. During the masterclass, Moor will introduce the concepts and functions of colour grading – how a film’s emotional texture and expression can be refined by colour grading, the differences between grading commercial and arthouse films, the differences of digital and celluloid grading, and other topics about colour grading that would be of interest to our audience. Moor is the colourist of Jinpa (directed by Pema Tseden; produced by Wong Kar-wai and Jacky Pang), The Road to Mandalay (directed by Midi Z; produced by Patrick Mao HUANG and Midi Z) and more than a hundred other films.

About the Guests
Clarence Tsui
Hong Kong-based Film Critic, Journalist and Curator
Clarence Tsui is a Hong Kong-based film critic, journalist and curator, and contributes reviews to The Hollywood Reporter and writes a regular column on Chinese cinema for the South China Morning Post. He has also written articles for the New York-based Cineaste magazine, the Film Quarterly journal published by the University of California Press, as well as other news and specialist media outlets. He conceived and presented a programme of communist-era Albanian documentaries for the Cinema du Réel festival at the Centre Pompidou, Paris, in March 2016, and was a co-curator of the China and Portuguese-language Countries Film Festival at the Cinematheque Passion, Macau, in July 2018. He has also served on juries at Cannes, Berlin, Locarno, Rotterdam, Paris, Tokyo, Nantes (Festival des 3 Continents) and Hong Kong (Asian Film Awards). He currently teaches journalism and film studies at the Chinese University of Hong Kong.

Pierre-Henri Deleau
Co-Founder, Former Festival and Artistic Director of Cannes Directors’ Fortnight
Pierre-Henri Deleau was born in France in 1942. He co-founded the Cannes Directors’ Fortnight in 1969 and led the section until 1998. He was also co-founder and general manager of the International Festival of Audiovisual Programmes (FIPA) in Biarritz from 1987 to 2009. From 1990, he has been the General Delegate of the International Historical Film Festival of Pessac. He was the assistant of directors Jacques Doniol-Valcroze and Pierre Kast, and produced films by Claude Miller and Hugo Santiago. He served on the jury of international film festivals such as Berlin, Venice, Rio de Janeiro, Montreal and Chicago amongst others.

Wen Tien-hsiang
Taiwan Film Critic, Programmer, Chief Executive Officer of Taipei Golden Horse Executive Committee
Wen Tien-hsiang is a renowned Taiwanese film critic and festival programmer. He started writing review and column for newspapers and magazines from his teens, and has published several books on movies. Wen was the programmer for Taipei Film Festival between 2002 and 2006, and was appointed chief executive officer of Taipei Golden Horse Film Festival by chairman of the time, director Hou Hsiao-hsien, and then also entrusted with the same post by the succeeding chairpersons Sylvia Chang and Ang Lee. In his term of service, Wen has added Golden Horse Fantastic Film Festival, Golden Horse Classic Film Festival, Golden Horse Film Academy, Movie Class for the Next Generation, and Asian Cinema Observers. Furthermore, he also teaches at the National Taiwan University of Arts and the National Chengchi University.

Yov Moor
French Colourist, DI Producer
Yov Moor, who has worked with both veteran and emerging directors, cinematographers and producers around the world on more than a hundred films of various genres including fiction and documentary films, will share his professional insight and experiences as a seasoned and well-travelled colourist. Recent films to his credit include Jinpa (directed by Pema Tseden, produced by Wong Kar-wai and Jacky Pang; nominated for Best Director at the Taipei Golden Horse and Asian Film Awards), Present.Perfect. (directed by Zhu Shengze; won Tiger Award at Rotterdam International Film Festival), Dead Souls (directed by Wang Bing; nominated for Golden Eye at the Cannes Film Festival) and The Road to Mandalay (directed by Midi Z.; won Best Film at the International Film Critics Week of the Venice Film Festival). His other past collaborators include Luc Besson, João Pedro Rodrigues, Lee Ping-bin, Tsai Ming-liang, Tran Anh Hung and others.

Nose Chan
Chairman of Ying E Chi, Programmer of Hong Kong Independent Film Festival, Film Editor
Nose Chan was a juror of the Hong Kong International Film Festival and the Taipei Golden Horse Film Festival. His works include Darkness Bride (2004), Innocent (2005), Magic Boy (2007), High Noon (2008), Tomorrow is Another Day (2018) and I Miss You When I See You (2018) amongst others.

Didi Wu
Programmer of Broadway Cinematheque and Hong Kong Asian Film Festival
Didi Wu received her first degree in architecture, and furthered her studies in film curating in London. After she graduated, she worked at the Taiwan International Documentary Festival, and later joined the programming team of the Broadway Cinematheque, presenting a broad range of film genres. Aside from film series, she wants to curate programmes of other artistic media to explore the possibilities of space and image.

Kiki Ho
Curator of Ground Up Student Film Festival, Member of Ground Up Film Society
Kiki Ho is an independent film producer and curator in Hong Kong. Her production credits include Keening Woman (2013), The Sea Within (2014) and Pseudo Secular (2016). These films were screened at several international film festivals including Busan, Torino, Montreal and Cairo. In 2014, she co-founded Ground Up Film Society with emerging independent film directors, and initiated Ground Up Student Film Festival, for which she has been the programme curator since its third edition. She has been involved in researching local moving images. Her latest research is on independent feature debuts in the recent decade.

*20% off discount for full-time students, senior citizens aged 60 or above, people with disabilities and the minder and Comprehensive Social Security Assistance (CSSA) recipients. Tickets for CSSA recipients available on a first-come-first-served basis. Concessionary ticket holders must produce evidence of their identity or age upon admission.

20% off for each purchase of 4 or more standard tickets. 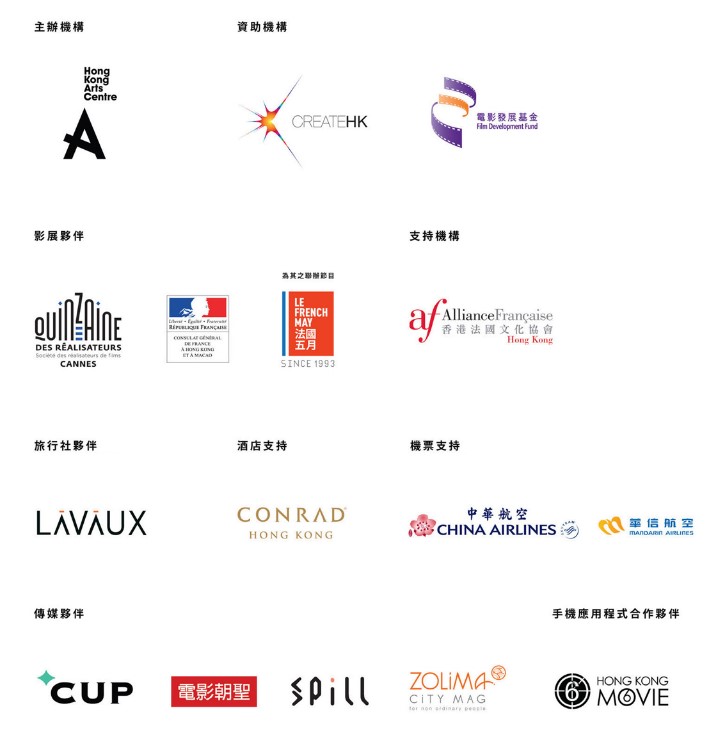 About Hong Kong Arts Centre
The Hong Kong Arts Centre is a multi-arts centre that fosters artistic exchanges locally and internationally, bringing the most forward creations to Hong Kong and showcasing homegrown talents abroad. The HKAC stimulates innovation and promotes creativity. Being Hong Kong’s only independent non-profit multi-arts institution, the HKAC offers exhibitions, screenings and performances, connecting the arts of Hong Kong to the rest of the world through programmes and collaborations. Come to the HKAC to experience, appreciate, learn and be inspired by arts.
Official website: hkac.org.hk | Facebook: Hong Kong Arts Centre | Instagram: @hongkongartscentre

Disclaimer: The Government of the Hong Kong Special Administrative Region provides funding support to the project through the Film Development Fund. The funding support bears no relationship whatsoever to the content of, or views expressed in this project.